skip to main | skip to sidebar
In the Flesh: L.A. (the West coast version of In The Flesh founded by Rachel Kramer Bussel) is a monthly reading series held the second Wednesday of every month at Hustler Hollywood, and features the city's best journalists, authors, scriptwriters and more offering their torrid tales for your entertainment and titillation.

Themed include Survival, Confessions, Madonna, Fears, Embarrassments and many more. Complimentary snacks and desserts from the Hustler Hollywood cafe will be offered. The event is free.

In The Flesh: L.A. debuted in May 2008. E-mail stan@stankent.com for booking, more information or interview requests.

Taxing Sex at In The Flesh

A small, lively mix of writers and listeners put aside their tax chores to come to Hustler Hollywood for a night of Taxing Sex, and the themes that bounced around the Hustler "Relax It's Just Sex" walls certainly showed that everyone wants to do to the taxman what they've been doing to us. There were timid auditors being punished and getting their just desserts, as did the audience who was treated to some excellent free samples of decadent sweets from the Hustler Cafe's goodie case and music from me, Stan Kent, one of the hosts,DJ and lion-tamer of In The Flesh. 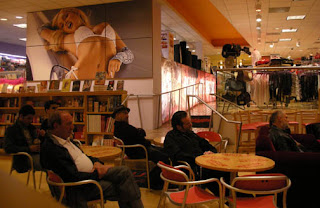 As part of our Erotica Review of the Month, the evening began with Kathleen Bradean from Erotica Revealed leading a discussion on what makes for good erotica. Instead of reading an entire review in its entirety, which you can do just by going to the Erotica Revealed website, Kathleen focused on the themes that the reviews uncovered and challenged the audience to agree or disagree. 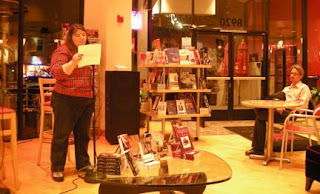 It was thought-provoking, interesting and titillating to hear the responses, expecially from authors as to why they write erotica. Overwhelmingly there was a sense of giving life to fantasies that perhaps draw from some small experience that then gets embellished into fictional accounts and in that sense genre erotica writers have much in common with memoirists such as James Frey. I don't know how many times at readings I've been asked "Have you done all the things you write about?" and I respond with the standard "Well, do you think Agatha Christie killed all those people?" But Kathleen's discussion made me realize that for me the good erotica I like, and the good erotica I've written does have an element of truth, or real life to it. What about you? Come to In The Flesh and let us know what makes for good erotica for you. If you're interested in reading something send Stan Kent or Jolene Hui an email. 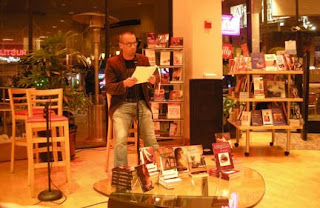 Our next reader was first-time erotica writer Tripp Mills who read, or should I say, performed a timely piece called "Stimulus Package" about an audit of a character named Bunny Pickle” (his pet name for his most favorite ex. Although this character is fictitious, her adventures were based on real life characters and experiences the author has sought in and out of the bedroom. He delivered the story with appropriate accents and emphasis indicating Tripp has much more to offer the erotica world, but he disappointed the audience by revealing he was not wearing his stylish leopard print underwear he had modeled for our upcoming events blog (see below to Writers' Gallery for April 8 - Taxing Sex)

Next up was our phone sex segment where we call an out-of-town author to talk dirty to us. The prolific Jeremy Edwards entertained us with "It Takes W-2 To Tango."

With microphone hovering phallic-like over my cellphone, carrying Jeremy's story of a long-simmering encounter from the yearly ritual of tax-season, the audience hung on every word. While you'd think it would be difficult to hold a room with something like this, it goes to show that you can let your fingers do the talking - and fucking - and reading. 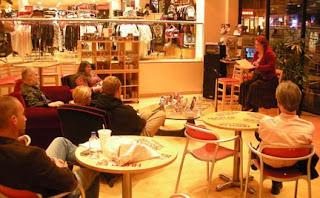 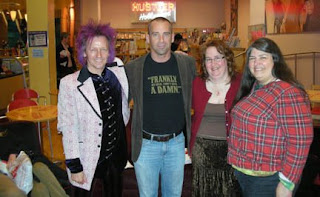 We wrapped up the evening with Hustler merchandise giveaways to our guests and listeners and I played some fitting music for everyone to hang around discussing the things that erotica writers and listeners do before heading over to the Rainbow for drinks.
Thanks to all the authors and participants for a great night that goes to prove the value of In The Flesh as a regular forum for authors and listeners to get together. Whether we have ten or a hundred people there isn't the point. It is to provide a regular salon for those brave souls who value an uncensored public environment for explicit writing, and in that regard Thanks to Hustler Hollywood for giving us a home, and a halo on Tripp's head as you can see in both of the group photos.

See you on May 13th for an outstanding night of Feminist Sex with Shira Tarrant, Michele Matheson, Jillian Lauren, Jessica Pauline and Elan.
Posted by Stan Kent at 11:36 AM

Authors Who've Read/Will Read at In The Flesh